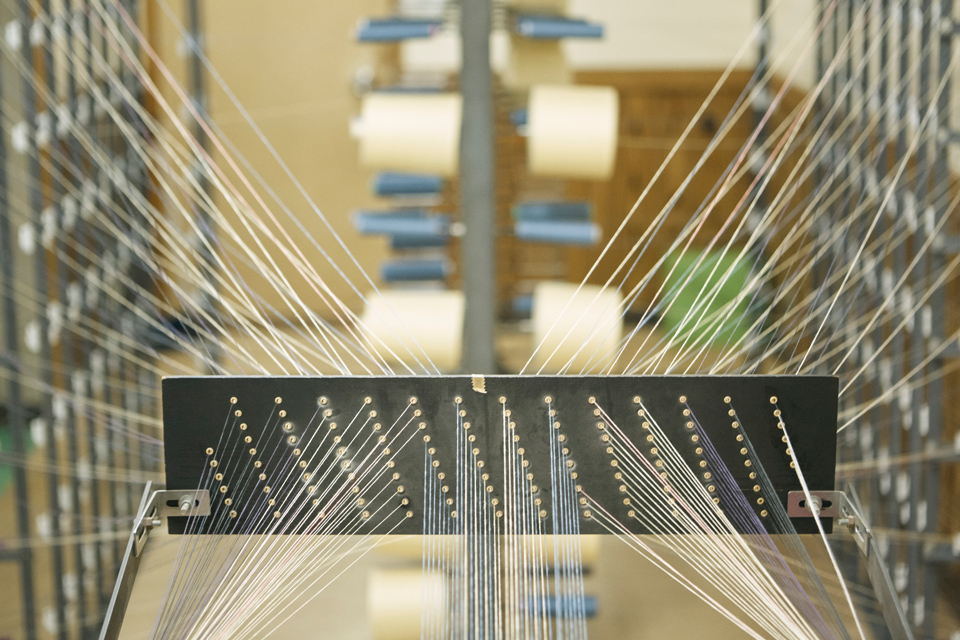 Have you ever thought about “HIMO (string)”? Do you have the knowledge that is more than the material to bind packages with? I have heard that there is the rare and beautiful HIMO (String) in KANAZAWA where the traditional crafts are still active, so we went there to check it out. 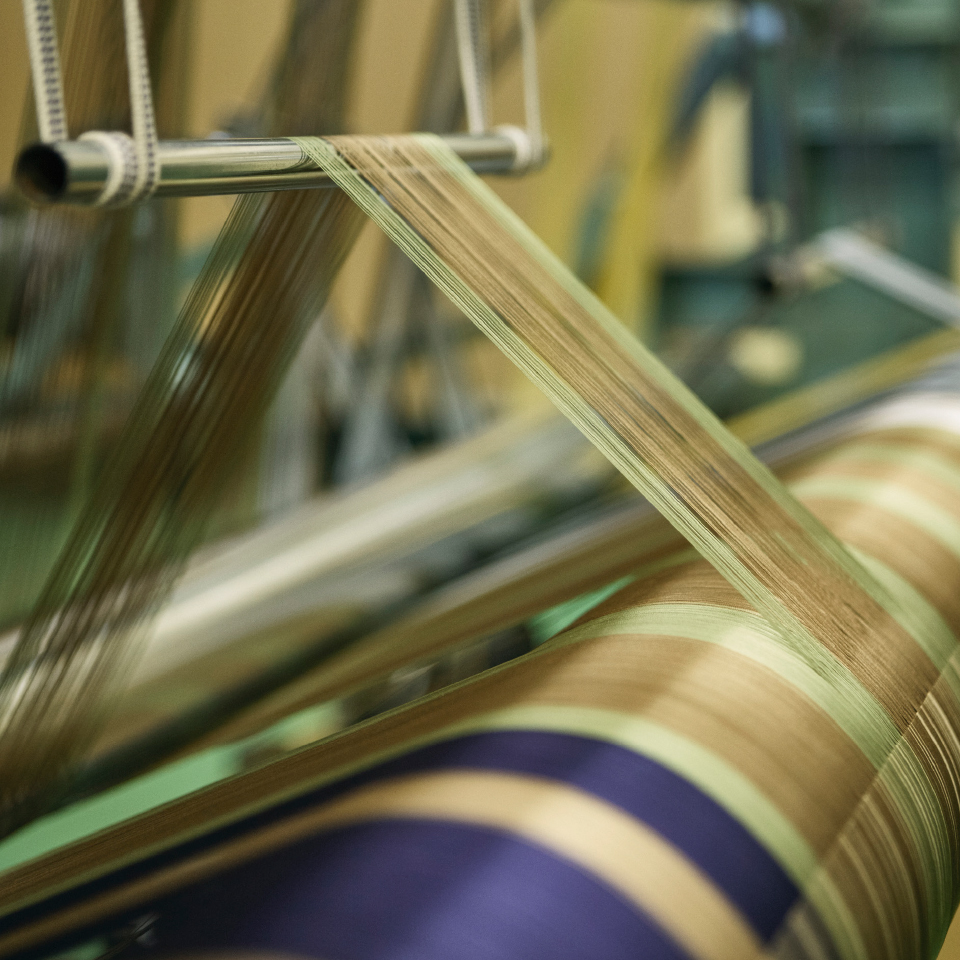 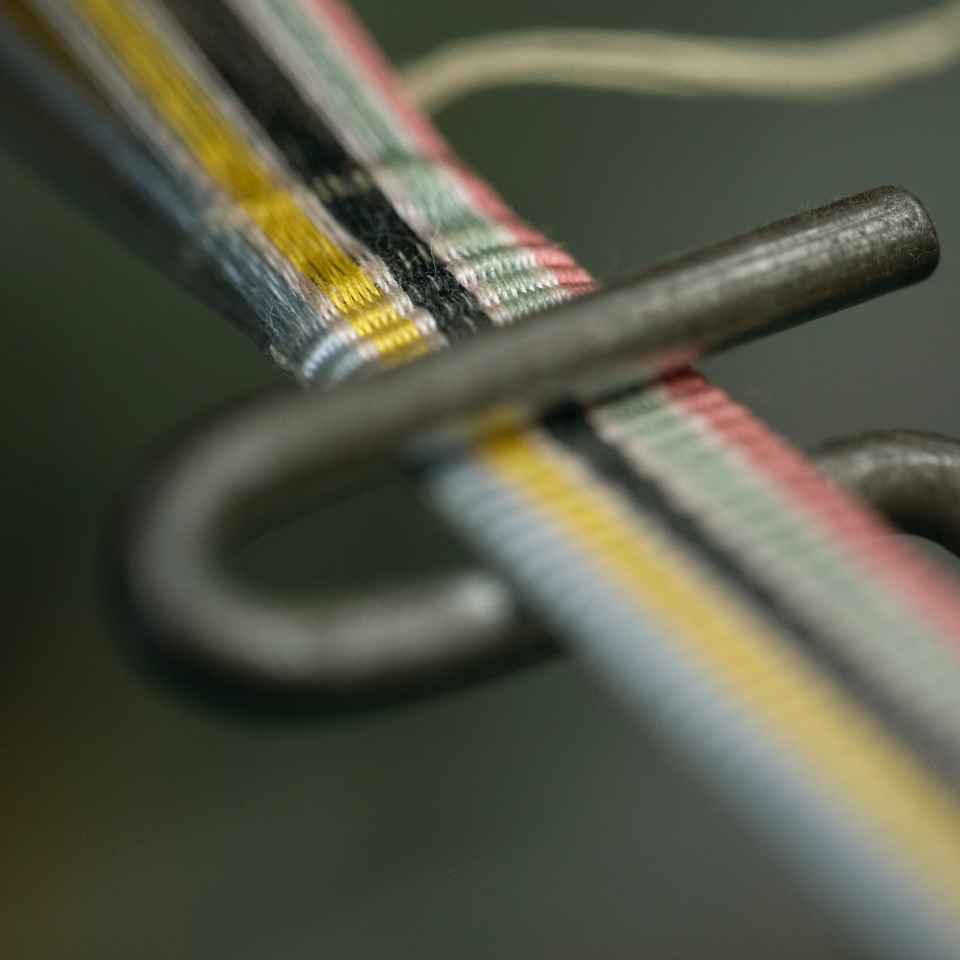 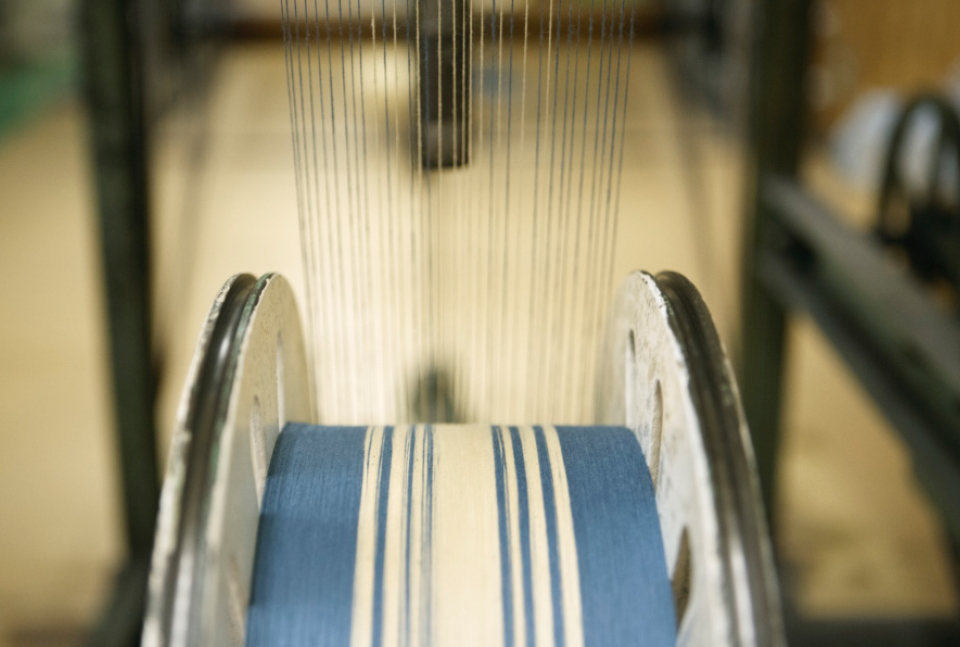 When making the flat 9mm width string from cotton string, one string is made from 36 strings.
These days, SAMURAI’s have gone and people rarely wear the KIMONO. However, SAANADA strings continue to be made even now.

The width is approximately 6mm to 10mm. No wonder, it is long like string. However, I was surprised to hear that “This thinly woven fabric is very rare in the world.” I looked a little closer at the string and found out that it is surely creating a new weave mixed and weaved using the subdued and soft colored string. The vivid but sophisticated colored string and the unexpectedly pop colored string. These strings are mixed, woven and produced a new weave with the width of only 1cm. Actually, the mature technique is needed to weave the correct and beautiful designs in this thinness so that the manufacturing process has never be shown to the public so far. They specially offered to show us these processes.
In the first place, the derivation of SANADAHIMO is said to date back to the feudal warlord Masayuki Sanada in the Warring States period. SANADAHIMO was an important product to make some money when they were travelling away from their own countries and collect the information to sell the string. In fact, the tight woven sting was very strong, and used to bind weapons and swords or as a tight band, or the sandal thongs for the clogs. 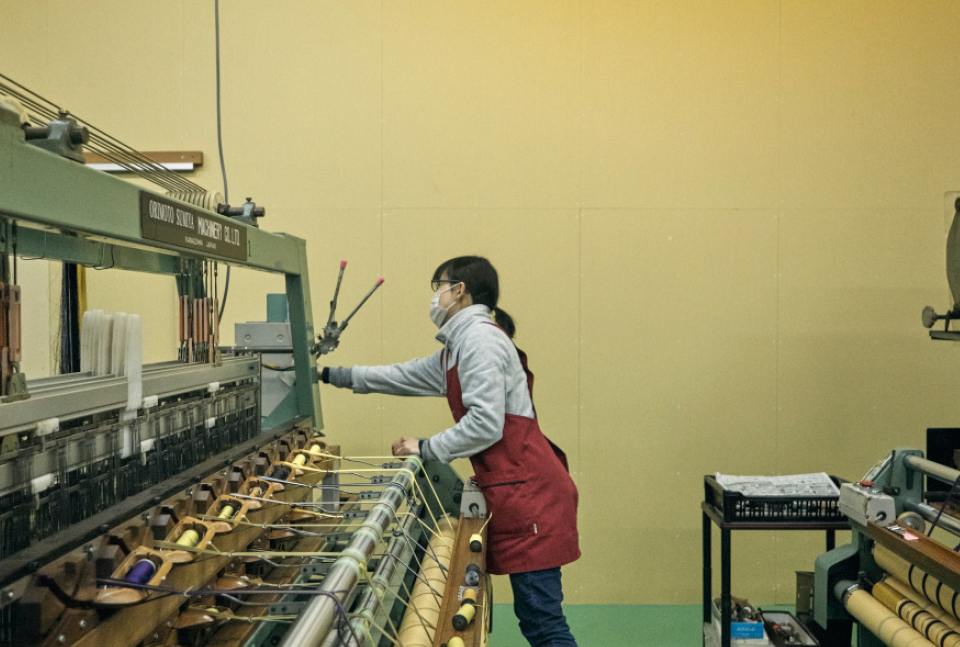 They always keep their eyes on the condition of the strings.
However, you can hear the roar in the factory, the scenery is quiet in a mysterious way.

Listen to the Voice of String

SANADAHIMO is like a craft, but also like an industrial product. The factory is as it stands is called a “factory” and the sounds of the weaving machines being operated rattled and rumbled like a big claps. Working hours are from 9am to 5pm. It is simple work to “weave preparing the warp and the weft”. However, the weaving machines are not automatic. Even if you stretch the string the people working there need to keep their eyes on the string. “Sting is like something living in nature. They change their expression by the temperature, humidity and seasons of adding the colors.” They sometimes are stuck in a bad mood, for example, they were surely the same color and condition when binded, but when the strings were woven the color unevenness sometimes suddenly appears. Even when we hang the strings perfectly, they sometimes get cut. Many people have been telling us that weaving the beautiful strings is really difficult. Even so, they could sometimes see what the strings needed quite clearly. On the day when they could arrange the good conditions, the strings move smoothly and naturally become a beautiful string. When you hear these stories, I think that this is a more like a craft, as we expected. 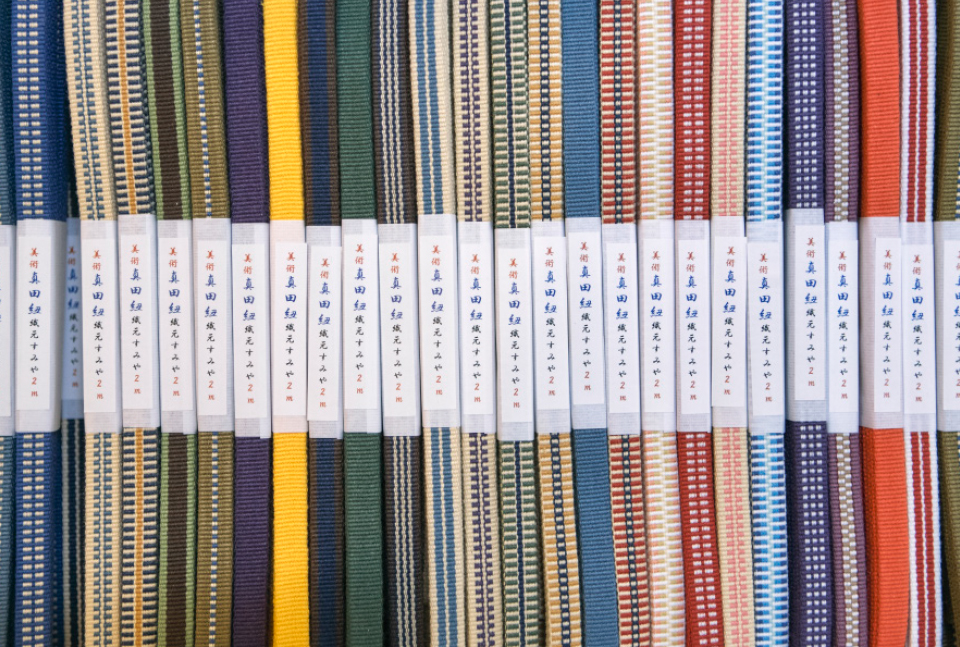 The fact that the strings of more than 100 years ago still remain intact means that these strings here will possibly remain strong for another 100 years from now. Even if they don’t belong to anyone any more.

Strings to express their identities

Actually, there are some reasons why SANADAHIMOs have such various, and beautiful designs. They are because the creators use these strings to bind the paulownia boxes to put their work inside. In “SUMIYA”, the materials are three kinds of cotton, pure silk and Kaganishiki. In addition, there are two ways to weave the flat string and rolling bag string. According to the sample note, generally available designs are more than 90 types. Including the differences of width, there are even more varieties.
Other than these strings, there are “Specific Design” strings and this one has the true value of the SANADAHIMO’s. These are made originally for specific customers and only these specified people can use this design. These specific design strings are ranged from the products of pottery and have a long history to the products of modern and outrageous creators. For example, the string of pink with dark green line is the one which EIRAKU of Kyoto wares have been used for long time. In fact, even if you don’t open the box, you know what is inside the box because of this string. This is one way to express the identities of the creator. Therefore, new creators design their own strings very carefully. The string Craftspeople also said “When brand new designs of string are born with a creator, I always feel further possibilities of SANADAHIMO’s string.”
All of us (coverage staff) selected some SANADAHIMO when we left the factory. Each staff selected different strings and even that combination looks like being able to show their personalities. 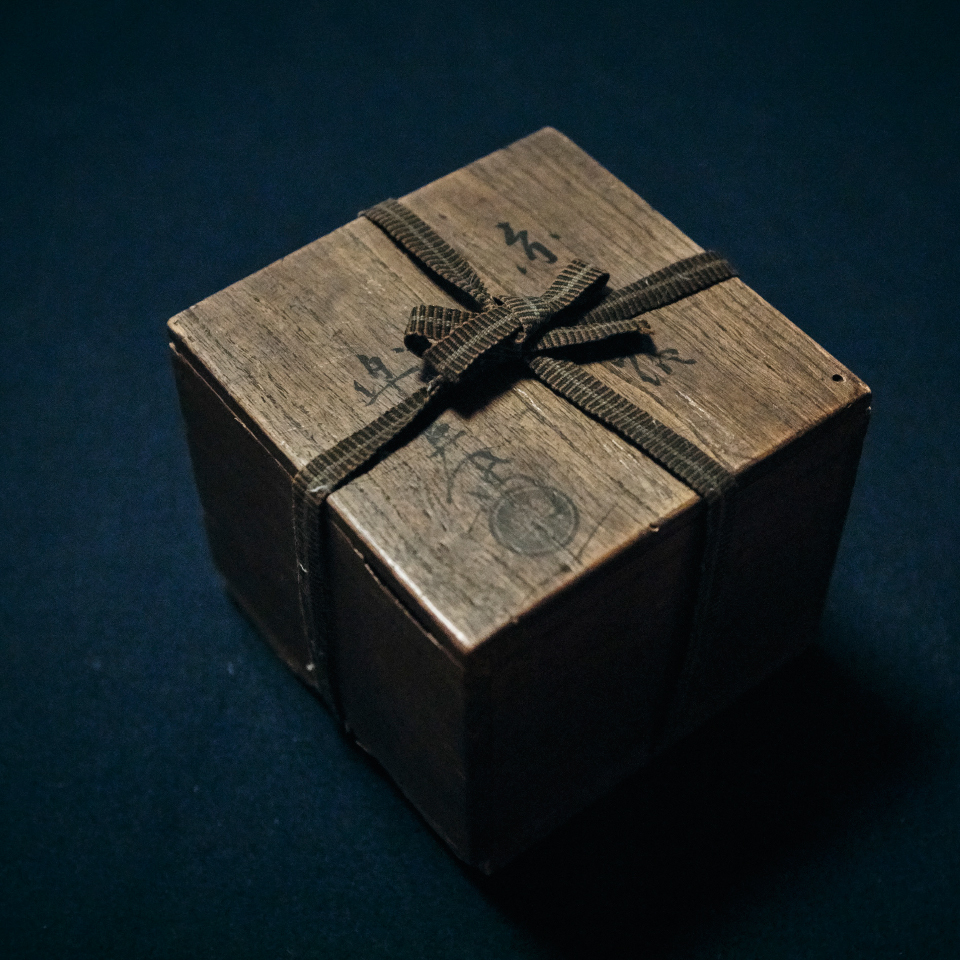 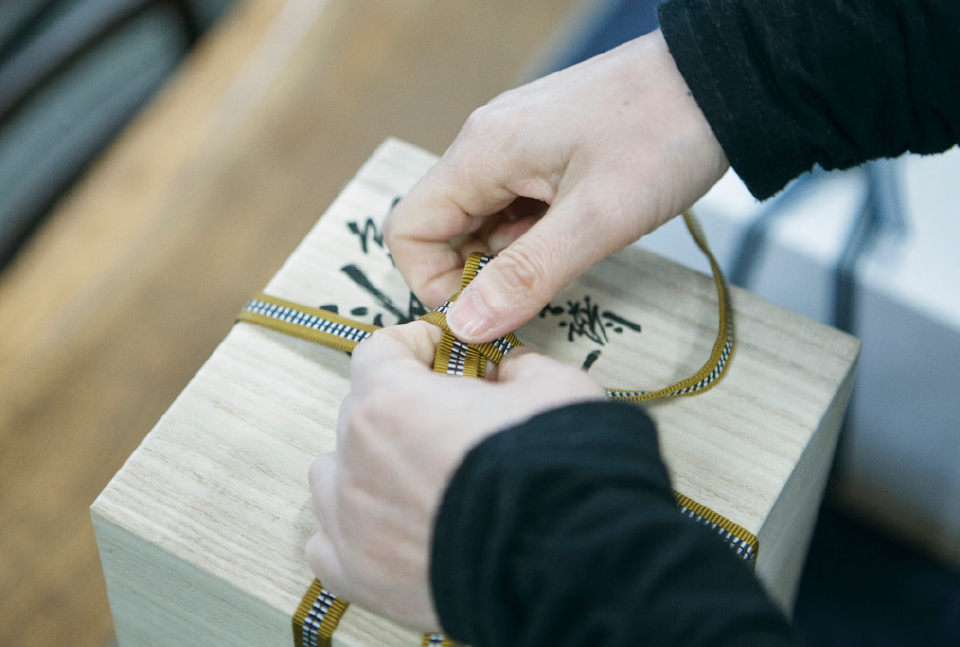 Because I was able to see the string actually being made, now I wanted to meet some of the people who are using these strings. The place I visited was “SINKOUTOUYOU” factory of Isokichi Asakura who plays an active role in the front line of modern KUTANIYAKI. There are various item from the dynamic and bright KUTABUYAKI’s from large exhibits to daily-use items. Only one part of them can be in the paulownia box and can be put the SANADAHIMO. Only after someone who wants to buy the items appears, the paulownia box is ordered. When the box arrives at the factory, the name of the artist and the item are written on the box, stamped and then, tightened with the string. For more expensive items, the bag strings are used. “I think that there are specific ways of tightening the strings for each creator.” As he is saying so, he told me how to make a circle on the top left of the box and tighten it. The sound of the rustling when touching the string is so pleasant to the ear. “You know? When the item inside the box is expensive, I want to make up the outside, too. After tightening the string, don’t you think that it is perfect?”
It is said that this factory originally started making stationary articles. In each generation, they have created new work which can show their own personalities. 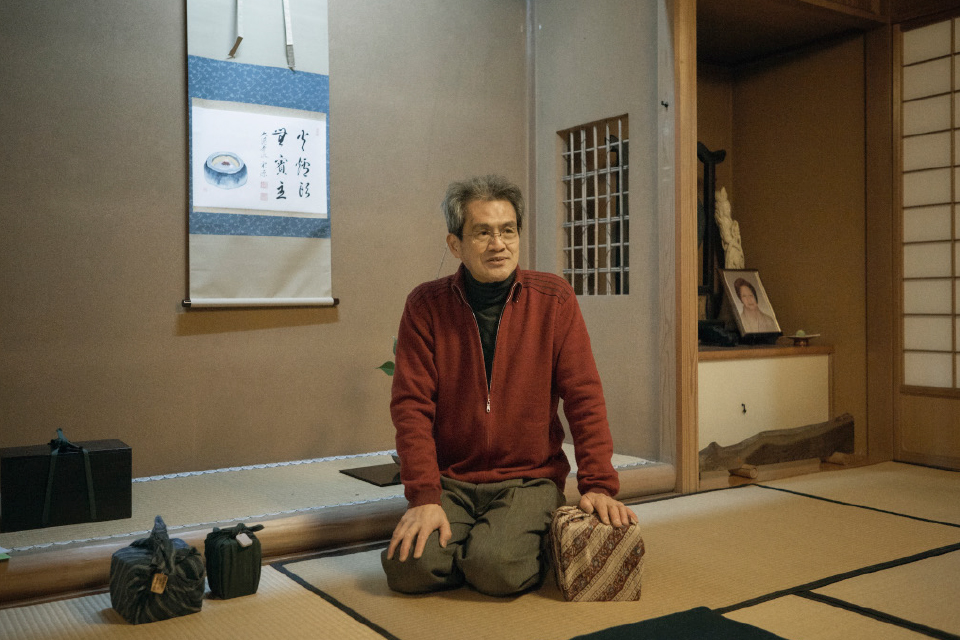 Mr, Yamamoto of KOUFUEN telling us that Chanoyu is something that hosts and customers both have an understanding for each other. Tea utensils are good tools for this mutual understanding.

At the end of this travelling, we visited “KOUFUUEN” which is the shop of old tea utensils in Kanazawa City. In here, we saw some old SANADAHIMO’s. Then, we went to the tea ceremony room and saw the lined-up tea bowls, the boxes and the SANADAHIMOs are more than 100 years old. As is to be expected, they were old but SANADAHIMOs without doubt. It is said that “Because SANADAHIMOs do not come away easily and are also strong, these old things still remain.” Moreover, there are some new big boxes containing old boxes and strings. “The box and the string show the long and distinguished history of the things inside and they make the things come to life. We have the remains of history in our hands.” Even the damaged SANADAHIMOs are not thrown on the scrapheap, they are also kept in the boxes with great care.
Especially, the tea utensils, there are certain string’s colors, which clearly show the styles such as the brown strings edged with yellow-green are Ura Senke and the yellow strings are Omote Senke. Moreover, each Motoie is related with the schools of Japanese tea ceremony called Senkejissoku has their favorite string color, and if someone who knows Japanese tea ceremony very well sees them, then they know it very well “Oh! Maybe this string is for ……” .
As we thought it is like a quiz, they told us how to enjoy the Japanese tea ceremony. Every tea party has its own theme and the various items are used to show these themes on site. For example, in the celebration of someone’s 60th birthday, the host uses the red hanging scroll or the red tea bowl. When the customer realizes that meaning, it becomes a great pleasure. If you have more knowledge, you can enjoy more deeply. The Japanese tea ceremony is the place where there is a lot of hospitality and intellectual excitement.
One end of sensibility which Japanese people grew up with for a long time is maybe exerting influence on SANADAHIMO. 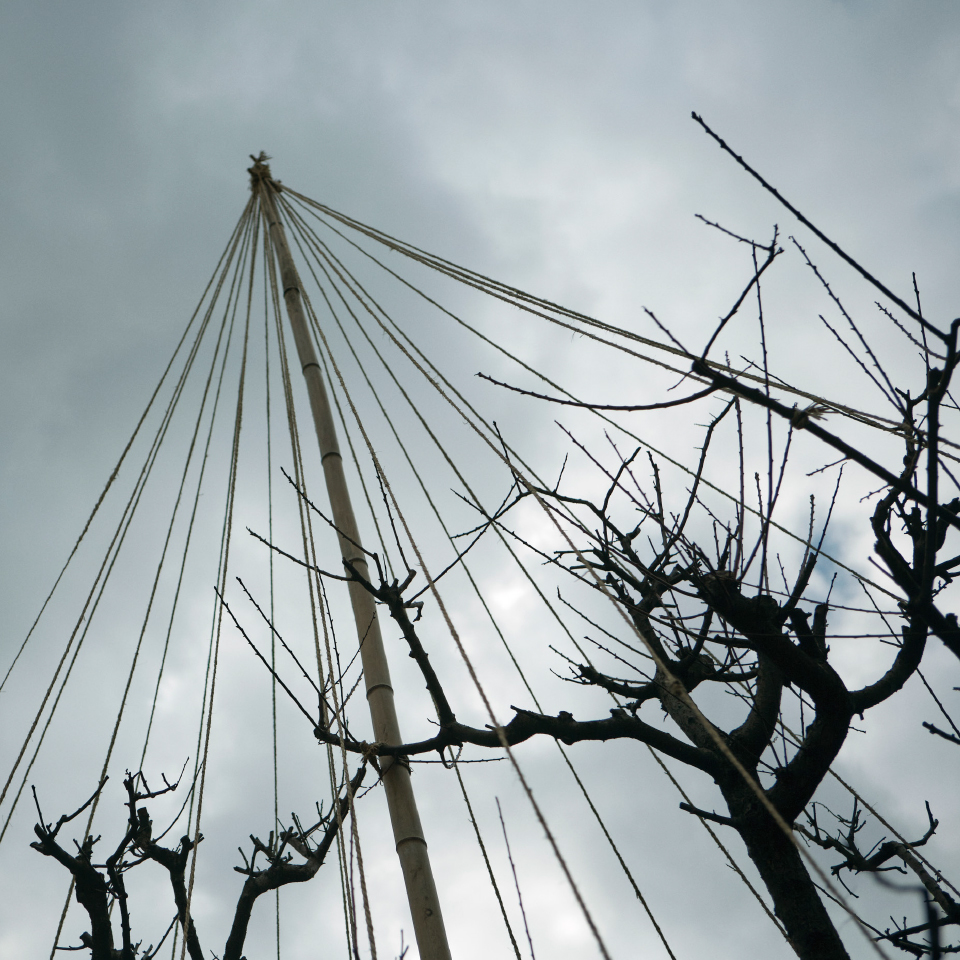 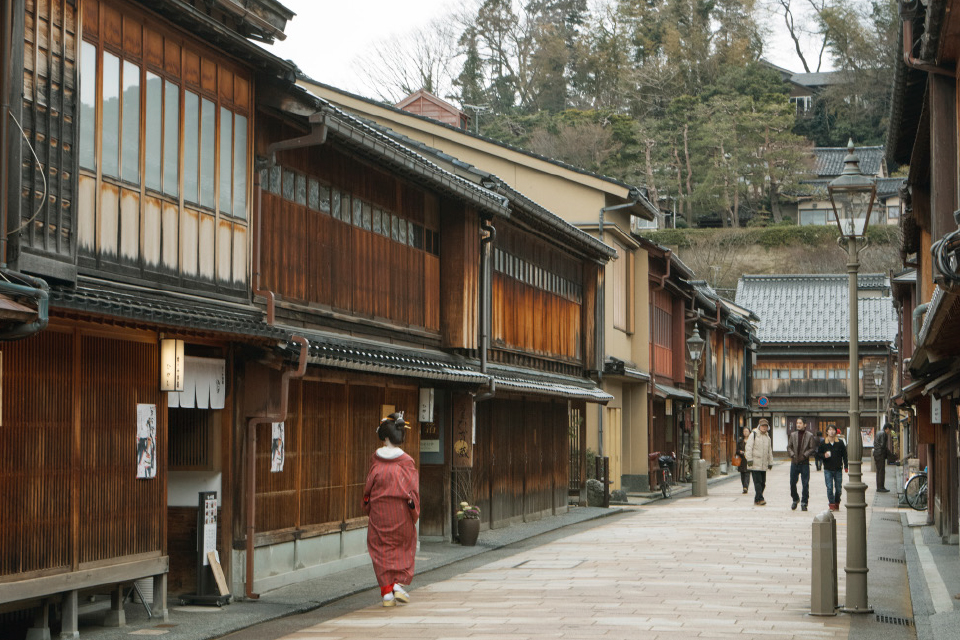 In KANAZAWA, the old Japanese styles are existing very near to you even now.

KANAZAWA strongly retains the culture of Edo’s gorgeous Kaga Senmangoku because they were able to escape from war-damage. We can see many scenic images at that time such as the old samurai residences and the teahouses of Nagamachi. At the same time, the culture making efforts of academics and crafts also remain. The traditional crafts such as Kutaniyaki, Kaga-Yuzen and gold leaf etc. caught on. Now, it is not rare to teach Japanese tea ceremony in kindergartens.
SANADAHIMO, as far as we can tell, have remained in this environment for this reason. It seems to be clear at the point that there is one more place to make SANADAHIMO even now is Kyoto. It is not independently existing by itself but always snuggled up together with other crafts. It is unnoticeable at first glance, but actually it must be there. That is SANADAHIMO. 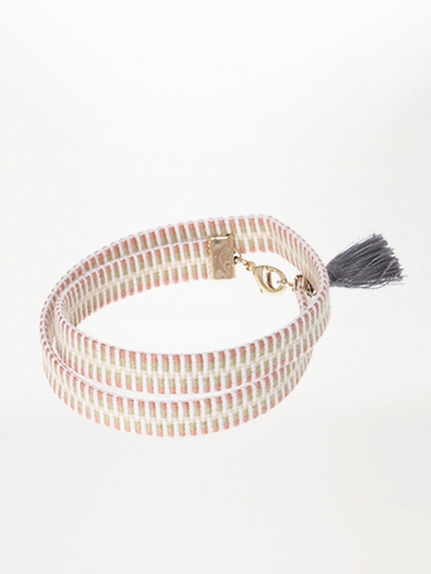 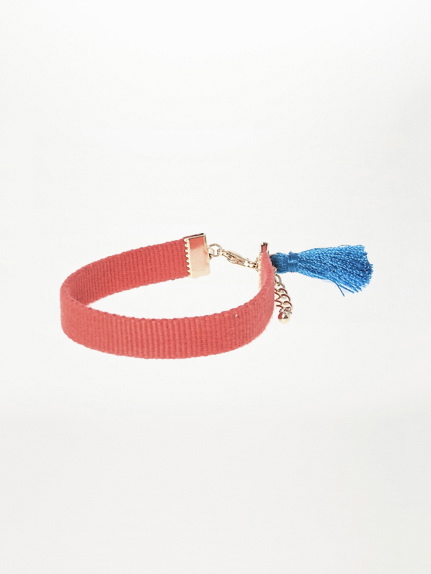 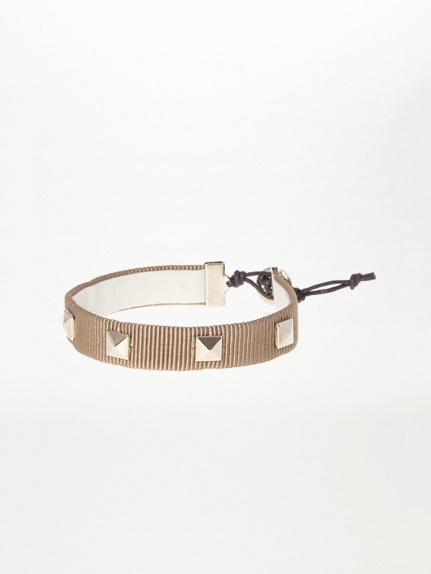 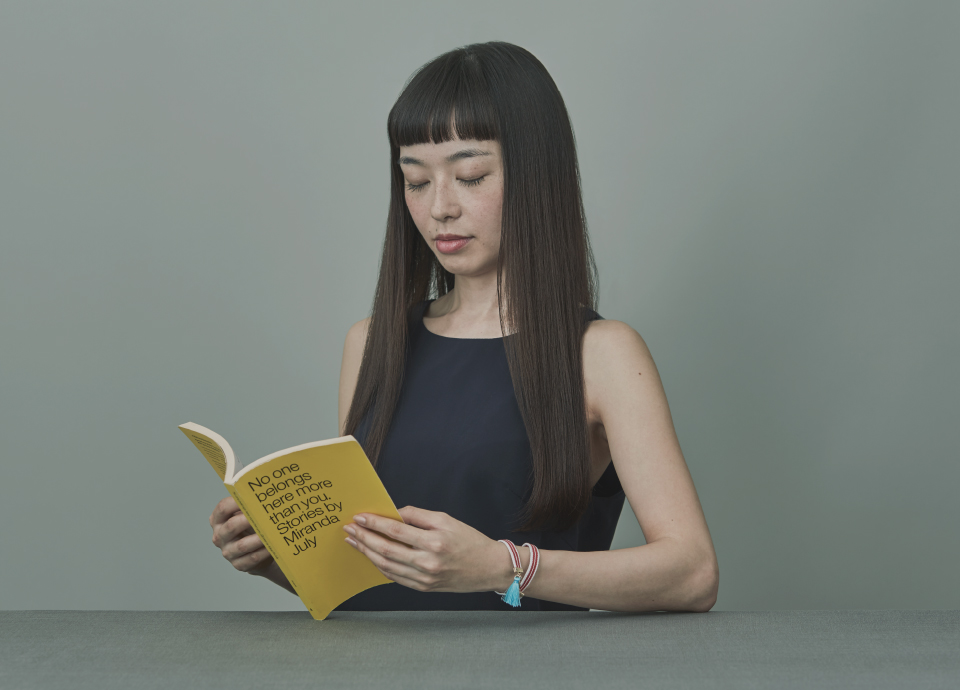 SANADAHIMO is called the world smallest weaving.
That string is woven tightly in a careful manner to the important things and cherished for a long time.
“KOE from” re-designed that string as a bracelet this time.
Taking advantage of the beautiful SANADAHIMO which has been expressing the user’s individuality with the various combinations of yarns, we prepared 15 kinds of designs.
With the hope that you always wear it as your charm to boost your mood.
Also with the hope that this bracelet enables you to enjoy the beautiful days of the coming spring.
We made these bracelets with these hopes.
You might enjoy deciding the coordination of your clothes to match the color of the bracelet.